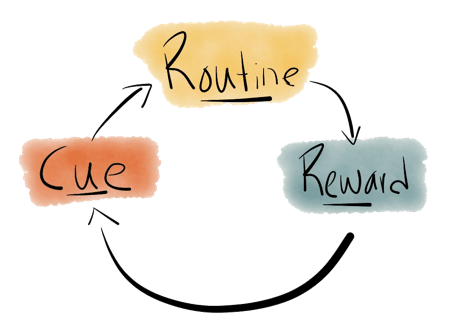 “Does Dynamics 365 have functionality that enables it to become a habit for users?”

Lack of user adoption has killed many an implementation. More than a decade and a half of research on Customer Relationship Management (CRM) systems has churned out consistently troubling failure rates for CRM implementations. Since Gartner’s 2001 study found a 50% CRM failure rate, study after study has reported failure rates between 30% and 70%.

These numbers make a lot of would-be CRM adopters understandably nervous. After all, CRM is not cheap. (Quanta, CRM is Not a Magic Wand)

During this blog I’ll identify

Knowing this will enable us to deliver D365 solutions that are adopted by users and provide a return on investment.

What is a habit?

R Andrews provides a definition. He suggests that from the standpoint of psychology a habit is:

‘a more or less fixed way of thinking, willing, or feeling acquired through previous repetition of a mental experience’ (Andrews, B. R., 1903)

How do we form habits?

Many studies have been completed about how we form habits. The Seger, C.A. and Spiering, B.J. (2011) article reviewed existing research on habit-formation, and concluded that it is encompassed by five characteristics:

The Lally, P., Van Jaarsveld, C.H., Potts, H.W. and Wardle, J. (2010) study aimed to contextualise habit-forming theories in real life. They found that repeating a behaviour in response to a cue appeared to be enough for many people to develop a habit. The range of times to reach a plateau shows that it can take a large number of repetitions for an individual to reach their highest level of automaticity. This means creating new habits will require self-control to be maintained for a signiﬁcant period before the desired behaviours acquire the necessary automaticity to be performed without self-control.

Another study completed by Lally, P., Wardle, J. and Gardner, B. (2011) ‘Experiences of habit formation: a qualitative study’ analysed habit formation in a real-life context; in this case, participants were enrolled on a habit-based weight-loss programme.

It confirmed that ‘with repetition, the behaviours became more automatic and less effortful’. In real-world habit-formation, structuring behaviour around cues at the workplace is an effective strategy. It showed that removal from a specific schedule, for example at weekends, does have an impact on habit performance, but the habits returned when people went back to the workplace. It also showed that, in the habit loop, ‘cues’ can involve events, people, locations, activities and times.

But how long does it take to form new habits? A study completed by Kaushal, N. and Rhodes, R.E. (2015) ‘Exercise habit formation in new gym members: a longitudinal study’. looked to increase understanding relating to: (1) exercise behaviour, (2) habit formation and (3) habit predictors, in relation to gym-going. They found that exercising at least four times per week for approximately 6 weeks was required to establish an exercise habit. ‘Affect’ and consistency were most significant in this context in forming an exercise habit; either seeing positive effects of the exercise or exercising consistently enough to make the decision to exercise more of a sub-conscious one.

For the purpose of this paper we will use Charles Duhigg’s book ‘The Power of Habit’ to identify the key aspects of habit formation. He has used many of the previous studies mentioned and views habits as a process adopted by the brain to ‘power-save’. Research shows that brain activity changes when habits are formed; reduced activity due to a lack of conscious thought. (Duhigg, C. 2013)

Duhigg suggests that habits are formed through the ‘habit loop’ process

1)   Cue – First, there is a cue, a trigger that tells your brain to go into automatic mode and which habit to use.

2)   Routine – Then there is the routine, a set of actions which can be physical or mental or emotional.

3)   Reward – Finally, there is a reward, which helps your brain figure out if this particular loop is worth remembering for the future.

Duhigg also suggests other elements that help us form a new habit and uses several examples from advertising and experiments to develop an argument that the habit loop above in itself is not enough for new habits to form. Cue, routine and reward are the components that need to be present. However, a new habit is only formed if there is fuel to power it; craving.

Changing someone’s habit still seems a huge task even if there’s a craving. Keystone habits suggest that success doesn’t depend on getting everything right, but instead relies on picking one or two priorities, delivering them and using them as powerful levers, or “small wins” that set the scene for other small wins to happen. Keystone habits are foundational behaviours that you can build on to create a cluster of good habits.

A cluster of habits could be described as a routine. Good or bad routines are difficult to shift and are often completed subconsciously. At this point a habit is just something you do and can be difficult to describe when somebody asks. Changing a whole routine is difficult, Duhigg suggests book ending new with old habits. Embedding new habits into old ones helps make the new one just part of the routine. Especially if they create a fresh sense of identity and a feeling of ownership.

This fresh sense of identity can be even more powerful if the habit was formed as part of a society. Movements don’t happen because everyone suddenly aligns. They begin through friendship, they grow through communities and they are sustained by new habits that change participants’ sense of self.

Bringing it together – The six ways to help form a habit

We understand that a habit is essentially made up of three key elements (Cue, Routine, Reward). Its difficult to change a habit but the use of cravings, identifying keystone habits, book ending new habits with old and making it social all help us to form new ones.

All this could be built on a craving to earn more money or beat fellow team members. The loop you want to modify should relate to a key strategy, policy or procedure to ensure its driven forward.

2. Work closely with users during the project – You should understand the habits they have when working with systems in their organisation. Could D365 sit in between two existing habits (used as book ends), making it feel a natural process. For example: you identify that users always log in to Outlook before opening another core system to complete the rest of the process. You have two habits in place:

In this example could the D365 app for outlook be used in the middle of this process to make life easier for the user:

Although adding additional steps you are helping to trigger the craving mentioned in point 1. As the project progresses you may want to take the rest of the process from the core system into Dynamics.

This blog doesn’t offer ground breaking ideas, but it does help put a different twist on a passion of mine ‘User Adoption’. Many people have tech habits, how many people look at Facebook or Twitter as soon as they wake up and then open Outlook as soon as they log on at work? I believe the information here will help us all add D365 as part of that tech habit routine.

Need help? Here’s how I can support your Dynamics 365 journey:

If this sounds good, or you’re not sure where to start please get in touch. Or

Book A Catch Up

Great resources used to put this blog together

Gardner, B. (2015). A review and analysis of the use of ‘habit’ in understanding, predicting and influencing health-related behaviour. Health Psychology Review. 9(3), pp 277-295.

Who’s responsible for our tech habits? Its complicated. Accessed 2/10/18

No. of Blog Hits